Icons & Symbols of the Borderlands

"For Molina, “art [is] not only aesthetically appealing, [a] reflective tool, but also … a coping mechanism—a counterpoint to extreme views” (from Icons)."

Art Curator, Diana Molina, photographer and artist, and the artists featured in her new book, Icons & Symbols of the Borderlands,[1] have given us a great gift. Icons belongs in every public high school library in the Southwest.  I am serious. In fact, place it right next to the other glossy art museum exhibition catalogues: those from the El Prado in Madrid, from the Museum of Modern Art in New York and from the Musee d’Orsay in Paris.  And lawyers and doctors and certified public accountants, buy a couple of Icons and place them in your receptionist areas.  Replace a few of the four-year old editions of Golf Digest and Glamour.

Icons is an art collection  from the 2015 traveling exhibit of the same name which featured the works of JUNTOS Art  Association.  JUNTOS was organized in 1985 to feature artists from both sides of the Mexico-US border. Some of our most notable Chicana/o artists are associated with JUNTOS.  The collection is a portrayal of the borderlands by thirty-five Mexican and Mexican American artists through what Molina characterizes as “imagery that communicates the experiences of our place at the crossroads”.  Mollina tells us that the exhibit is ever evolving as new artists and new pieces are featured.

Herself an El Paso native, Molina began her first career with IBM during the early years of robotics and automation.  Later, she would spend a decade in Amsterdam as writer and photographer for various international magazine publications.  She now lives in New Mexico where she maintains her studio.

For Molina, “art [is] not only  aesthetically appealing, [a] reflective tool, but also … a coping mechanism—a counterpoint to extreme views” (from Icons).

Four of  our own favorite pieces by artists featured in Icons, are the following:

Cesar Martinez (2016), Europa Y Las Americas, Mixed drawing media on brown contractor paper. The ambiguously vanishing, but not quite gone,  Spanish bull and native jaguar, a juxtaposition of fusing Spanish and indigenous influences into the mestizo.

Victoria Suescum’s (2012) border fruit items (acrylic on paper) conjure up the raspas, paletas and aguas frescas of our youth, growing up along the border, once accessible only south of the border, and now, as Americana as apple pie.

Celia Alvarez Munoz (1991),  El Limite (see Art Query); mixed media; mural photograph of a child’s toy train made up of sardine cans which recalls children’s made-up toys.  El Limite is reminiscent of a short piece (still unfinished and unpublished, with working title “Toy Soldiers”). An Anglo boy traveling with his father who owns a close-to- bankrupt traveling carnival sets up tents in a barrio along the border.  The only children around with whom he can play are the Mexican kids who daily assemble under the shade of a huisache tree.  There, they play with pieces of two-by-fours which – with the help of nails, string, pebbles –  which they have fashioned (in their imagination) into cars and boats and trains.  The Anglo boy’s toys are hundreds of toy soldiers.  When the carnival leaves town, the Anglo boy receives the gift of some of the two-by-fours and local kids receive the gift of toy soldiers. 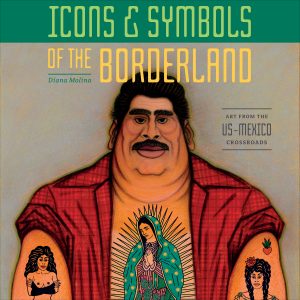 Icons & Symbols of the Borderlands