"How fortuitous that we can celebrate both Mothers Day (el día de la Madre on May 10th) and our homage to celebrated poet laureate, Carmen Tafolla. So, let’s call this our Mothers’ Day tribute to all mothers, all women, and especially to Carmen Tafolla. Named the first-ever Poet Laureate of San Antonio in 2012, Tafolla was named Poet Laureate of Texas in 2015 (see reviews and links elsewhere in this edition of IberoAztlan). [1]"

In her poem,   Feeding You [2] Dr. Tafolla portrays the Mexicana mother as having deep attachments to an indigenous America, but also metaphorically,  as sculptor of identity and of the moral and emotional center of her children.

Bear with me, as I describe the setting for the poem.  We are seated at the breakfast table.  There is an abundance of food in a traditional Mexican American breakfast, a molcajete of ground chile and wooden board and rolling pin and a basket of tortillas. The mother stands by the two-burner propane gas stove.  Her son sits opposite to her. The father is absent.  That fact is noted, but is irrelevant, for the time being. Silence reigns.   We sit between the two, observing both of them, through the gift of omniscience.  Mother turns to son who does not notice.  She contemplates him briefly, smiles, and returns to the tortillas on the griddle.

We listen in to a mother’s silent contemplation of the son she has raised.  Through a stream of consciousness, her feminine poetic voice speaks, affirming and reinforcing her own self-hood and that of her son.

“My legacy, to you son – that is, my most valuable possession –is what you have grown up to be.  I worked hard to accomplish that, son.  You are of my body, nurtured with my breast milk and with my special recipes which have sustained you,

With the taste of green life and corn stalks

With the wildness of thick leaves

That is my strength and my legacy which I have passed on to you, son.”

Mother turns again, and her son is busily finishing up a third taco. “I have slowly, carefully, methodically,  strengthened you with my own inner strength; conveyed it to you from the prenatal stage through adolescence, and continue to feed you,  and sustain you with my recipes.  My recipes have been food for your soul.”

The chile is not only an essential ingredient for many Mexican recipes. In Mexico, it is available in over 150 varieties. Like corn has been a Mexican staple, for centuries, chile has been a staple of life in the Americas, and for many Mexican Americans. It is the very embodiment of nourishment.  In Feeding You, the chile becomes the embodiment of a mother’s nurturing ingredient, the mode through which the mother — culturally and socially — strengthens and fortifies the soul of her son:

I slipped chile under your skin (into your soul)

Tafolla’s extended methaphorical use of the chile as the quintessence of Mexicana moral and cultural values and standards of behavior is both creative and intimate.  Throughout the son’s life, a mother’s tenderness and intimacy has been counterpoised through her soulful lessons and admonitions, which on occasion have not been painless lessons for her child:

Carefully cut [chile] into bitefuls for you as a toddler,

Increasing in power and intensity as you grew

Until it could burn forever.

The absence of the father allows Tafolla to place the mother in an equal nurturing footing as a father.  The mother has not only physically nurtured her son, but more importantly, has done so emotionally,  perhaps on her own.

Finally, lack of a material legacy for her child, which pre-occupied the mother in earlier years, is now of little concern.  For the herencia, her legacy, has already passed on to the next generation.  Her herencia is something of much more value.  The chile is the sustaining ingredient of the family and cultural legacy, an embodiment of an intergenerational bond which strengthens and fortifies. For what good  is a material legacy if a prodigal son will waste it as soon as he receives it? Not so, with the mother’s chile, which like the mustard seed will grow into a massive tree.

In Poquito Alla, Tafolla treats us to the parable of the man with missing digits on both of his hands.  His is the voice of the poem.

As the poem commences, we have still not met the man, a neighbor in a community which we have just joined. We regularly see him working in his yard as we make our way on the sidewalk.   Most shy away from having to see his hands. We, too, have avoided this neighbor, avoided having to avoid having to be caught staring at his injury or birth defect.  He seems to understand our ambivalence and our hesitation to come face to face with him.  We infer his words:

He is a veteran, some say. Was it a war injury?  Who knows? Someone tells us that it was not a war injury, rather, an industrial accident.

This hand, he says,

It was an accident.

We avoid the thought, but can’t, not entirely:

Reach down in there for me and git that wrench,

and then he flipped the switch too soon.

We surmise that the man surely blamed his employer.  He must have received compensation for his injuries; perhaps recovered a hefty settlement from one of those  lawyers who advertise.  We learn differently:

Y el pobre…forgot to pay me for that day

or maybe scared to death to send the cash

for fear I’d ask for more.

Then one day, while on the sidewalk, we turn and see the man working in his garden.  It is too late.  He looks at us and smiles.  We return embarrassed smiles of our own.

This hand still does so much

“Poor man,”  we imagine and continue on our way.

On the next stroll, the man surprises us when he suddenly steps onto the sidewalk.  He nods, smiles and stretches his arm toward us,

And only yesterday, my baby grandson stood right up

Solito, holding on to these good fingers here.

Zest for life! Strength of soul!  What lies beneath the readily observable exterior? The superior poet’s unending task is to “read profound disclosures in the faces of men and women”.[4] Tafolla imparts that gift to us in this parable.  A veteran who survives the war unscathed, attributes it to divinity.  But when the vicissitudes of life visit upon him a devastating and disabling injury just as bad as any resulting from war, his faith is  undiminished.  His faith equals that of Job’s.  And his righteousness and willingness to forgive are greater than those of the prodigal son’s father. The poet searches deep beneath the exterior veneer, whether that veneer be exterior blemishes, phenotype or gender, and shares what she finds.  If only for a moment, we respond to the poet’s gentle nudging of our humanity for the other, to overlook the exterior veneer; to disregard or set aside instincts, born of mature prejudice (lacking the purity and innocence of the man’s grandson – derechito); and to acknowledge: all persons have value, and some, are divine.  It is indeed the superior poet who gives voice to those men and women by translating their soulful strength to metaphors.  Carmen Tafolla is such a superior poet.

[1] Carmen Tafolla’s New and Selected Poems continues TCU Press’ series of collections by the Poets Laureate of Texas. Named the first-ever Poet Laureate of San Antonio in 2012, Tafolla was subsequently named State Poet Laureate of Texas in 2015. This collection displays her mastery of the art of bilingual code switching, mining the riches of two languages—Spanish and English—to produce works that celebrate the beauty and vigor of an Indo-Hispanic heritage that has enriched American culture for generations.  Called “a world-class writer” by Alex Haley and a “pioneer of Chicana literature” by Ana Castillo, in 1999 Tafolla was presented with the Art of Peace Award for writings that contribute to “peace, justice, and human understanding.” Her works “thematically cross cultures and move into questions of human survival on this earth”—Dr. Wolfgang Karrer.  for more Carmen Tafolla, see: https://muse.jhu.edu/book/66876/image/front_cover.jpg?format=180

[2] “Feeding You”  is from the poet’s 2015 collection, This River Here, published by Wings Press and “Poquito Alla” was initially published as part of the collection,  Sonnets to Human Beings and Other Selected Works (1992), published by Lalo Press in Santa Monica California, and in trilingual edition in Germany by the University of Osnabruck Press.   They are included in the TCU Press’ Poet Laureate Series,  Carmen Tafolla, New and Selected Poems (2018). 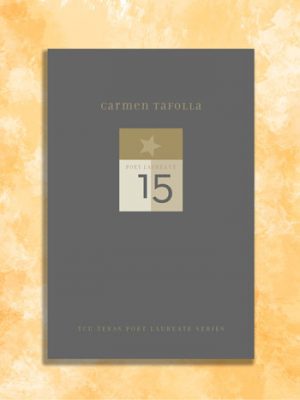